Trump sneers at Cruz’s wife, showing why he’s not just going to lose female voters, but a lot of male voters, too.

While most of the U.S. political world was focused on the terrorist attacks in Brussels and the primaries in some Western states Tuesday night, Donald Trump—surprise, surprise—was sitting around nursing a grudge. And he decided it needed airing out on Twitter, of course. 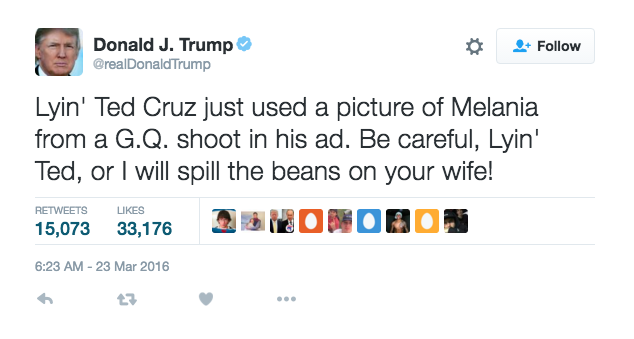 There’s been a robust discussion in feminist circles about this ad that is actually a meme and how it’s unfair and slut-shaming. There’s a strong argument to be had supporting this, but you have to give the woman who made it, Liz Mair, some credit for finding and exploiting a real vulnerability when it comes to Trump and female voters, both liberal and conservative.

While it’s true that Melania Trump is smarter than a lot of people realize and isn’t doing anything wrong by taking risqué photos, this ad isn’t really about her. This ad is about Donald Trump, highlighting that he really is a cartoonish stereotype: The wealthy sexist who talks about women like they’re objects for purchase and who is probably not interested in his wife because she speaks five languages and has studied architecture and design. One can politely ignore that fact in public, but there’s simply no way women aren’t taking note of it in private.

(Conversation I heard from two women talking in public recently: “Well, she’s probably smarter than the rest of us. We’re working and she’s probably out on 5th Avenue shopping right now.” “Yeah, but him? Ugh. He can’t really think she wants him for himself.”)

Trump’s reaction to this—to try to drag Ted Cruz into a wife-measuring contest, like they are debating the merits of owning a Ferrari vs. a Toyota Corolla—just confirms the suspicions that this ad is trying to raise.

This is why those who worry that Trump’s over-the-top sexism will somehow help him in a general election match-up against Hillary Clinton are completely misreading these particular tea leaves. Sure, there are a lot of men out there who see things the way Trump does. Those men admire him for his history of categorizing women as either sex objects or wastes of space whose continued existence is a mystery to him.

But those men are not the dominant voting bloc in a general election. In fact, men, as a group, do not make up the majority of voters. Women vote more than men and have since 1980. And women hate Trump. Sure, there’s a lot of sexist dislike for Clinton, which explains why her unfavorability ratings are significantly higher with men than women. But Trump’s sexism has an even more profound impact on his popularity with women, as Jon Schwartz at The Intercept explains:

And this is before the general election even really gets underway and Trump starts pulling his “why is this woman I don’t want to have sex with even talking” act with Hillary Clinton. As Jeet Heer points out at the New Republic, the only time Carly Fiorina was really doing well with Republicans was when Trump was disrespecting her in this way. And that’s with a crowd that has way higher tolerance for overt sexism. The public at large is not going to like it, not one bit. Nor will this hurt Trump with just women, either. Sure, Trump plays well with the Maxim crowd, but he takes the sexist vitriol so far that it repulses a whole bunch of men, both liberal and conservative. The exchange with Cruz was a good example of how the way Trump talks about women is also insulting to men.

Most news sources are assuming that Trump was referring to Heidi Cruz’s history of struggling with depression, and if so, then congratulations, Trump. You did the impossible: You made Ted Cruz, by far the creepiest politician on the national stage since Ross Perot, seem like a decent man who cares for and stands by his wife.

That sort of thing doesn’t just impact female voters, but a lot of men, as well. Even some men who might have some sympathy for Trump’s leering sexism are going to draw the line at treating a beloved wife like she’s a defective product who needs to be returned to the factory just because she has some health problems. Most men’s marriages are more like the Cruz marriage than the Trump marriage. They aren’t going to be keen on the idea that Trump would look down on them for that.

Six out of 10 female voters think Trump is an embarrassment, but it’s also true that 4 out of 10 male voters think that. Just wait until the general election, where his sexist antics will get even more attention (as hard as that may be to believe) than they are getting now. This is a man who can’t crack 50% of Republican voters, even in Arizona, where his xenophobic campaign should be going over like gangbusters. On a national stage, against a female opponent whose very existence counters Trump’s reductionist attitudes about women’s worth, Trump is going to look even more like an embarrassment.

Amanda Marcotte is a politics writer for Salon. She’s on Twitter @AmandaMarcotte.