Problem:  Your right-wing brother-in-law is plugged into the FOX-Limbaugh lie machine, and keeps sending you emails about “Obama spending” and “Obama deficits” and how the “stimulus” just made things worse.

Solution: Here are three “reality-based” charts to send to him.  These charts show what actually happened. 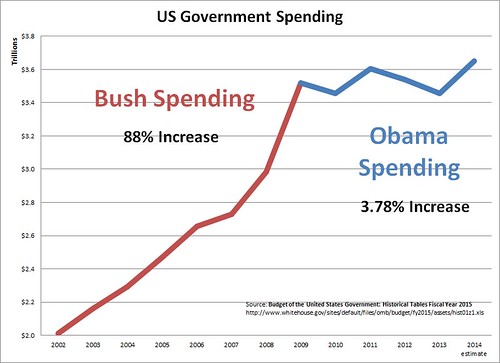 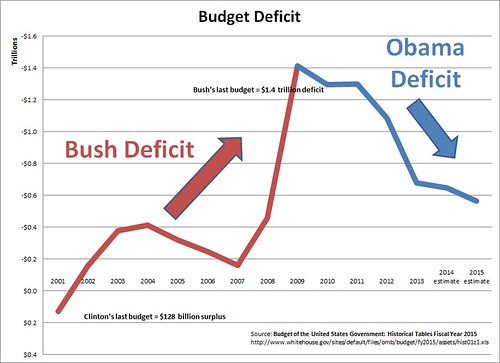 Note that this chart starts with Clinton’s last budget year for comparison.

The numbers in these two charts come from Budget of the United States Government: Historical Tables Fiscal Year 2015.  They are just the amounts that the government spent and borrowed, period,  Anyone can go look them up.  People who claim that Obama “tripled the deficit” or increased it or anything of the sort are either misled or are trying to mislead. President Obama inherited a budget deficit of $1.4 trillion from President Bush’s last budget year and annual budget deficits have gone down dramatically since.

The Stimulus and Jobs 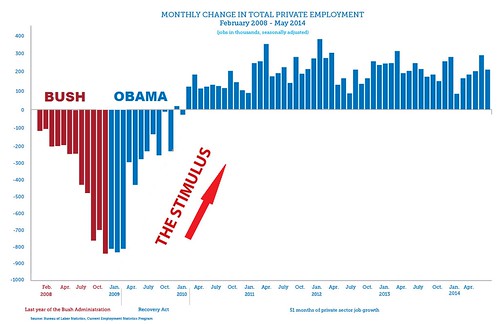 In this chart, the RED lines on the left side – the ones that keep doing DOWN – show what happened to jobs under the policies of Bush and the Republicans. We were losing lots and lots of jobs every month, and it was getting worse and worse.  The BLUE lines – the ones that just go UP – show what happened to jobs when the stimulus was in effect. We stopped losing jobs and started gaining jobs, and it was getting better and better.

The leveling off on the right side of the chart  shows what happened as the stimulus started to wind down: job creation leveled off at too low a level.

Conclusion: THE STIMULUS WORKED BUT WAS NOT ENOUGH!

These are just three of the false things that everyone “knows” because places like Fox News repeat them over and over and over.  Some others are (click through): Obama bailed out the banks, businesses will hire if they get tax cuts, health care reform cost $1 trillion, Social Security is a Ponzi Scheme or is “going broke”, tax cuts grow the economy, government spending “takes money out of the economy.”

Actually This Reduced Spending And Lower Deficit Have Hurt The Economy

Government spending is literally, by definition, the things that government does to make our lives better. People have been tricked into thinking that government spending is somehow bad. The billionaires and giant corporations spread this nonsense around because they are greedy and just want their taxes lower. The top income tax rate used to be more than 90 percent and the top corporate tax rate used to be more than 50 percent. That was back when we built this country’s great infrastructure, had good schools and defended the world against the Soviet Union. We also had higher economic growth and a growing middle class.

Government spending does not “take money out of the economy.” In fact it puts money into the economy, creates jobs and lays the foundation for future prosperity. The decline in government spending shown in the charts above is the reason that the economy remains sluggish and jobs are still hard to get. Just look at that chart showing what the stimulus spending did for the job situation. But since the stimulus ended, Republicans have obstructed every effort to continue to use our government to help our economy.

For example, this chart from The Atlantic, “The Incredible Shrinking U.S. Government,” shows how government spending to create government jobs helped us get out of the 1981, 1990 and 2001 recessions. But since the 2007 “Great Recession,” we instead have laid off hundreds of thousands of government employees, obviously making unemployment even worse. 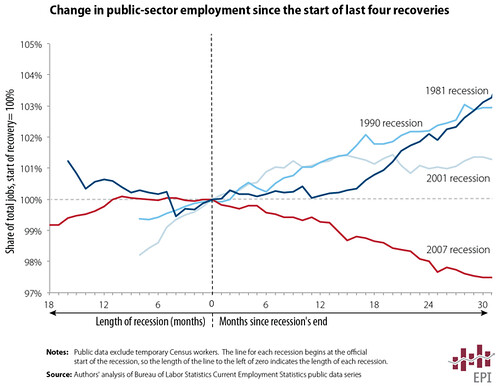 This chart shows only the loss of government jobs. Never mind the job losses in the stores where all of these people were shopping. The Atlantic article says this, “EPI argues that “these extra government jobs would have helped preserve about 500,000 private sector jobs.”

And never mind the millions of jobs lost or not created because of “austerity” cutbacks in government spending on things like maintaining (never mind modernizing) our infrastructure! And beyond that, what if we had spent some money (public investment) to retrofit every building and home in the country to be energy efficient, or built high-speed rail around the country? How many millions more would have been hired to do those things – and how much would we be saving on energy and other costs from now on? 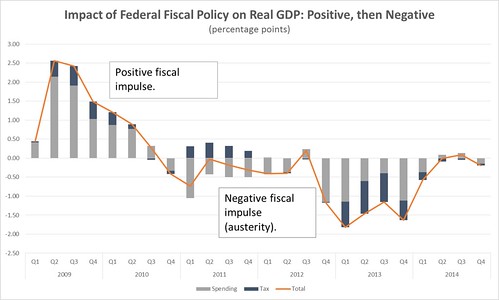 “As you can see, the impact of austerity on the economy is projected to be reduced over the next two quarters, but the next budget is not expected to be expansionary – and Republicans are still writing budgets under the mistaken conservative theory that spending cuts somehow stimulate growth.”

They say that government is like a family budget – when the money isn’t coming in you have to cut back. That’s just nonsense if you think about it. First of all, if we make the big corporations and billionaires pay their fair share of taxes again, the money would be coming in. And anyway, families do invest in a mortgage, student loans and car loans so they can have a place to live, a good education to get a better job, and a car to get to and from work.

So don’t fall for the nonsense the big corporations and billionaires are spreading through their right-wing outlets. When you look a little deeper, that stuff just falls apart. A country needs to invest to create jobs and have a better future.

These things really matter.  We all want to fix the terrible problems the country has.  But it is so important to know just what the problems are before you decide how to fix them.  Otherwise the things you do to try to solve those problems might just make them worse – just as laying off government workers in a recession makes unemployment worse.

If we get tricked into thinking that Obama has made things worse and that we should go back to what we were doing before Obama – tax cuts for the rich, giving giant corporations and Wall Street everything they want, when those are the things that caused the problems in the first place – then we will be in real trouble. Note: This is an updated version of the 2011 post, “Three Charts To Email To Your Right-Wing Brother-In-Law.” This post has updated charts using more recent data, and has been rewritten somewhat, partially to note the disastrous effect of austerity (budget cuts) on people and our economy.

This post originally appeared at Campaign for America’s Future (CAF) at their Blog for OurFuture. I am a Fellow with CAF.  Sign up here for the CAF daily summary and/or for the Progress Breakfast.